You don’t have to trek to Washington, D.C., to see at least three of the 125 Golden Haiku displayed throughout the city’s business district. Golden Triangle DC generously sent me a selection of photos of my three winning entries, some of which I’m sharing here (and on Twitter and Facebook). A fine souvenir of a very cool contest!  :- D 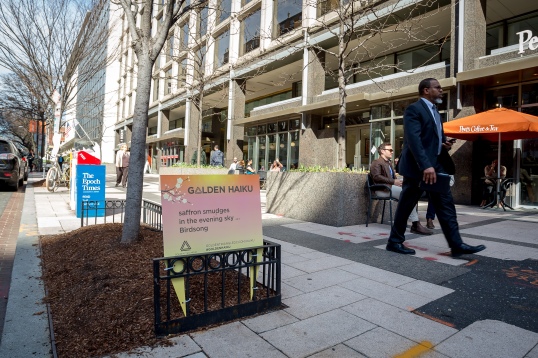 More photos of Golden Haiku can be found on Twitter: https://twitter.com/hashtag/goldenhaiku?f=images&vertical=default&src=hash.  ;- )

THE PRODIGY OF IDEAS

~ because even bad days have sparkle and magic ~

Improved living through the application of oil and acrylic

anotherKate
Red Around the World

Your friendly guide to national parks, road trips, and all things outdoors

“To live is the rarest thing in the world. Most people exist, that is all.”

A tour of Public Lands & National Parks in the USA

Digging deep into the small things

breaking down why great fiction is great

Art doesn't have to be worthy

to be worth sharing

Caring About Our World Reflecting About Life

This WordPress.com site is the cat’s pajamas

The Poetry Department . . . aka The Boynton Blog

if you're bored, you're not paying attention

a space for zen words

of the Pacific Northwest: Interactions with the wild things--Live life outdoors!

a haiku journal by margaret dornaus

the stupid universe
objects for thinking

A Poet in Time